What is a Cataract?

A cataract is a clouding of a part of the eye known as the crystalline lens. The lens is a clear tissue located behind the pupil – the dark circular opening in the middle of the iris or colored part of the eye. The lens works with the transparent cornea, which covers the eye’s surface, to focus light on the retina at the back of the eye. When the lens becomes cloudy, or cataractous, light cannot pass to the retina properly, and vision is blurred and decreased.

Although cataracts result from many conditions, the most frequent cause is the natural aging process. Other causes may include injury, chronic eye disease, and other system-wide diseases such as diabetes.

More than half the people over age 65 have some degree of cataract development. Cataracts can take from a few months to several years to develop. Sometimes, the cataract stops developing in its early stages, and vision is only slightly decreased. But if it continues to develop, vision is impaired, and treatment is necessary.

Surgery to remove the diseased lens is the only effective treatment for cataract. Neither diet nor medications have not been shown to stop cataract formation. Cataract surgery is now a frequently performed operation in most parts of the world. More than one million cataract procedures are performed every year, and in the majority of those cases, the diseased tissue is replaced with an artificial device known as an intraocular lens implant.

What happens in cataract surgery?

In a cataract operation, the eye’s natural lens is removed. Therefore, a new lens must replace the removed one for vision to be restored. This new lens can be in the form of special eyeglasses with thick lenses or contact lenses. Most commonly, it is in the form of an intraocular lens implant, which permanently replaces the old lens.

The artificial lens is made of plastic and is usually inserted at the same time the cataract is removed. Depending on the individual case, the lens is placed directly behind or, less frequently, in front of the iris, the "colored" part of the eye. Not every case is appropriate for this type of procedure, and the method of implantation used depends on the individual patient.

Once the surgeon has determined that intraocular lens replacement is appropriate, the patient undergoes a special preoperative evaluation. Like contact lenses and "prescription" eyeglasses, intraocular lenses differ in terms of refractive power, and the evaluation will determine the proper lens power of the implant. The length of the eye is measured and the curvature of the cornea is evaluated. Calculation of the implant power is based on this information and performed on a computer.

The natural lens has the ability to accommodate, or change shape, so that it is possible to focus at varying distances. The intraocular lens, which cannot change shape, is usually calculated for a middle distance so that the patient can see well enough to move about without glasses. Normal eyeglasses must still be worn to see up close up and far away. In most cases, though, patients notice significant improvements in vision resulting from intraocular lens implantation.

Generally speaking, cataract surgery lasts about an hour and is usually performed on an outpatient basis. After a brief rest after surgery, the patient generally returns home the same day.

In some cases where there is a previously existing medical problem or when advised by the surgeon, hospitalization may be needed.

Because of inflammation related to the surgery, initial vision may remain cloudy for a few days or weeks. Clear vision generally returns in about three months. 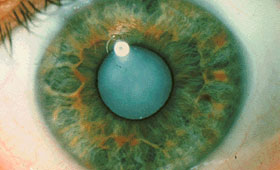 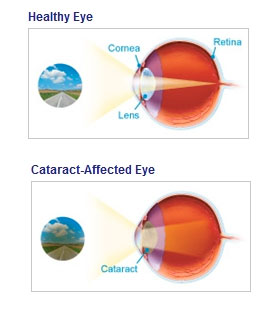 Fill out the form below or call us to request an appointment.